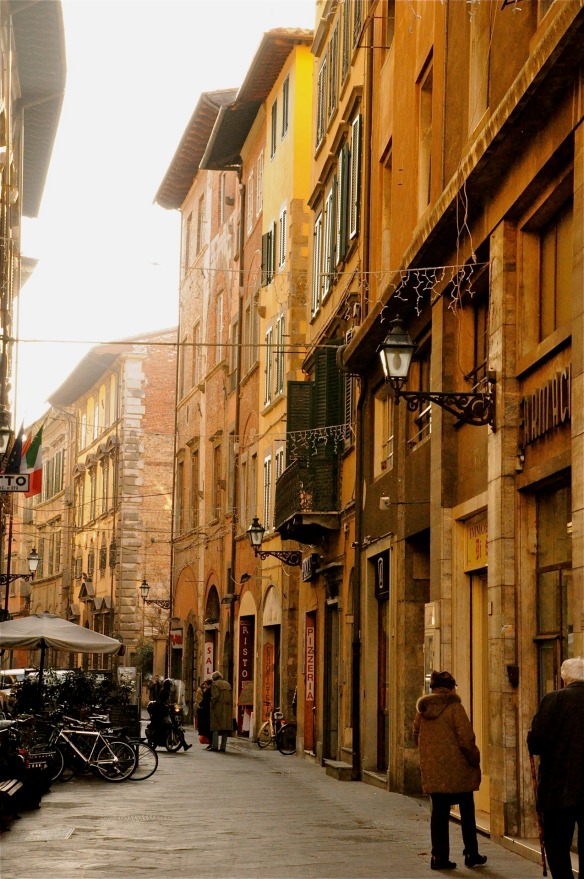 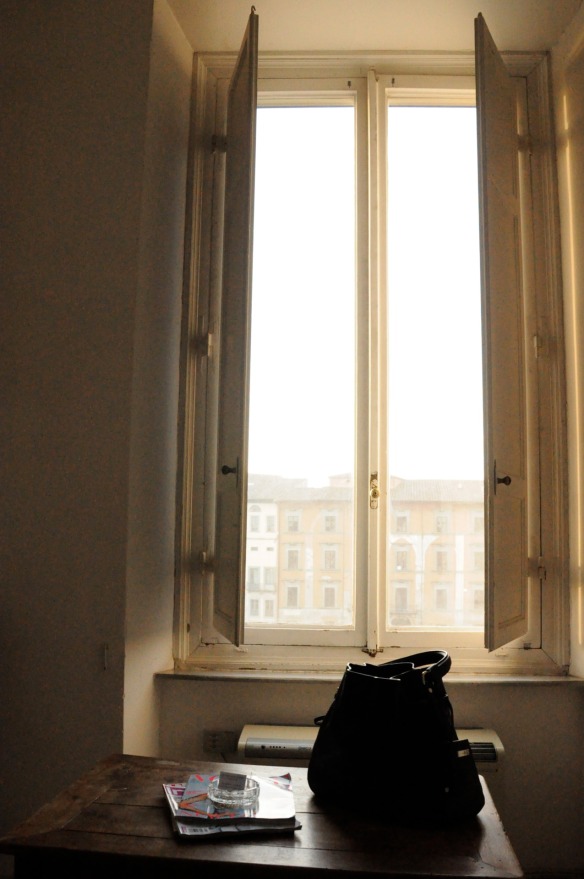 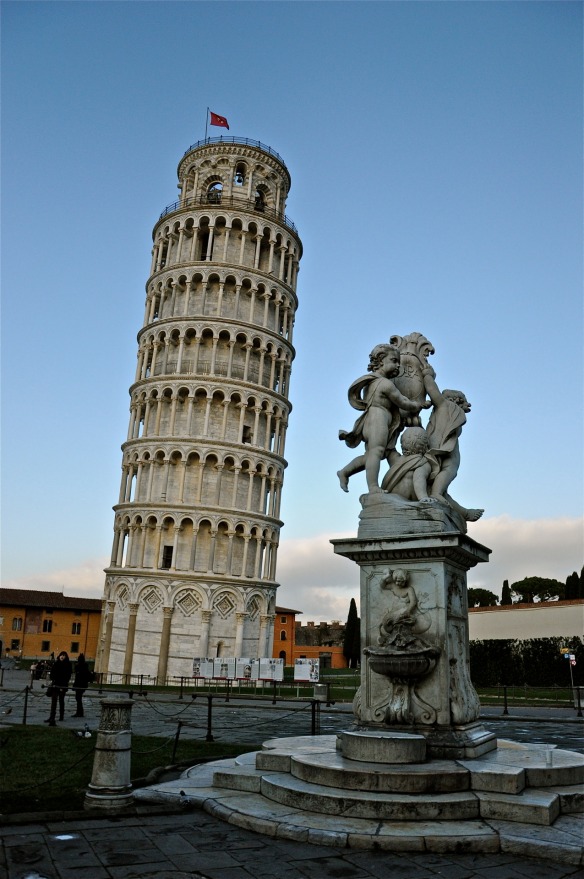 Yes, I totally stole that title from a movie, but I’m lacking in creativity today. I am le tired. Probably because my in-laws are about to head home after a whirlwind two weeks visiting us here. And boy, did we have fun!

So, yes, as the title suggests, we just spent a lovely long weekend in Tuscany (gotta love these vacations within vacations that our guests are into, as we get to reap the benefits as well!). Jaro and I had visited Florence(or Firenze as I will call it going forward) last winter thinking it would be our last chance to do a trip in Europe for awhile (at the time, we were thinking we’d be moving out west)! Did that plan get turned on its head or what! Funny how we ended up in the same region exactly one year later.

We flew into Pisa on Friday morning. Dropped the bags at the hotel and scurried out. Did a little walking tour of the city (thanks, Rick Steves) and somehow, weirdly, ended up here:

Of course we had to do a dorky tourist photo in front of the Leaning Tower! Everyone else is doing it, so why can’t we? (Wait, is that another stolen line? Whatever.) Even my in-laws got into it. They were so strong, they pushed it upright!

Ah, the magic of photo editing.

Anyway, after a long, hard day of city-walking, gelato-consuming and wine-drinking, we were ready for dinner. Where to go? Our guide book surprisingly had no suggestions for dining in Pisa. For shame, Rick Steves. So we wandered around looking for a place that seemed hoppin’. Finally, we stumbled upon Ristoro di Vecchio Teatro that had one table of people. Good enough. Although the server/owner did not speak a lick of English, we understood that we would keep being served until we were satisfied. What a way to eat! Plates of pesto brushcetta, olive crostinis, orange risotto came pouring out of the kitchen (cooked by the owner’s wife, no doubt). We finally tell him to stop and yet, still he brings a new plate! We were stuffed. Beyond stuffed. But, it was a great experience and really got us into stretching out our stomach lining the Italian eating mode. Traveler Tip: When in Tuscany during the off season, just wandering around for a place to eat is really your best bet. Pisa was pretty quiet, so we took a chance and ended up having a better time than we could have planned. So, what’s next?

The next morning, we got going and headed to Firenze for a day long tour of the Tuscan countryside, mostly in the Chianti region. Stopped in beautiful San Gimignano for lunch. Here we are outside of the city:

Look how cute it is! After a nice afternoon there, we headed to Poggio Amorelli Winery (http://www.vinalita.com/poggio_amorelli.htm) for a Chianti tasting. This small, family run winery was perched on top of rolling Tuscan hills – gorgeous! Little did we know the tasting also included cheese, olive oil, balsamic vinegar and grappa. For those of you that don’t know, grappa is a hard liquor made from grape skins. Like vodka, but not. It actually has a nice grape-y aftertaste. Here are some of the selections we tried (fo free!):

Jaro and I bought a bottle of Chianti and a bottle of Super Tuscan (no joke) wine. Fun Fact about Chianti: Real Chianti from the actual region of Italy has a black rooster logo on the bottle. If it doesn’t have it, it’s not real Chianti. And once you taste the difference between real and fake, you’ll never want the fake stuff again. (I find that this applies to a lot of aspects of life, but moving on!) Of course, a tour of this winery was not complete without a visit from some friends:

It’s the family horse and sheep that are best friends! They go everywhere together. Back off – I’m already writing the children’s book.

After this loooong day touring Tuscany (it’s rough work, I tell ya), we headed into Firenze and went to our favorite restaurant there: Il Quattro Leoni (http://www.4leoni.com/index.php). Jaro and I had discovered this place last year when we visited Italy and it was so fun to go back! It’s a cozy, bustling little bistro that serves up mind-blowing pastas.

No rest for the weary. The next day we hopped on a train to nearby Siena. It’s a cozy little city with lots of character. Fun Fact about Siena (and just Italy in general): Most restaurants close during the winter. We finally found a place that would serve us, called Hostaria Il Carroccio. Supposedly Trudie Styler frequents this place because she and Sting have a villa nearby. Le sigh. Here is a pic of my MIL and I in Siena’s Il Campo:

After more roaming, more gelato, more Chianti… It was time to head back to Firenze. Again, we went to another restaurant that Jaro and I had enjoyed last year – Cafe ZaZa (http://www.trattoriazaza.it/). With a 10pm dinner reservation on a Sunday night, we were the only people there, but it’s worth it for the roasted artichokes and truffle ravioli.

Monday. Our last day. We decided to really make the most of it, so headed to Lucca before flying out that night. Lucca is a small Tuscan town that was completely untouched by war. It still has the medieval wall encircling it. Cool! We had been warned that Lucca is all closed up on Monday mornings, and boy, they weren’t kidding. Unfortunately, we messed up the trains, and didn’t arrive in Lucca until 2pm. Remember what I said about things being closed during the off season? This also happens daily between 2 and 7. After three unsuccessful tries, we ended up having pizza (northern Italy is not known for great pizza) and foccacia bread. What are you going to do? Another shot of grappa eased the disappointment. …Followed by a bottle of grappa and it’s consumption it in alleys so as not to be seen. #badkids:

No faces in that photo as to protect the guilty. Ha!

Overall, it was a really great trip! Seeing a place during it’s low season allows you to explore unbothered and at your own easy pace. There is no tourist hype to get caught up in. Just be prepared for some restaurants and attractions to be closed.