Well hello there! It has been quite awhile since I have written to you guys and I have so much to tell! Just got back from several weeks away with time spent in Ukraine and Turkey. It was an exhausting coupla weeks, but really fun and interesting. Let’s get after it, shall we?

In order of cities I visited, we start with Kiev (or K’yiv or Київ). As the title suggests, this was not my first visit to this city (you can read about that eye-opening experience here and here). As Kiev gears up to co-host the European Championship 2012 this summer, I was curious to see what progress they had made to improve the city and make it more accessible/appealing to tourists. It’s their time to shine! Right? The Euro Cup is the THIRD largest sporting event in the world after the Olympics and World Cup. This is probably a little known fact to many Americans.

Why did I expect a change? Well, when I had visited in September, I did not exactly feel comfortable as a foreigner there. I think I made that pretty obvious in those previous posts. And to put it bluntly, I still don’t! In some respects, there was a hint of effort. The Kiev Metro has maps in English (rather than just Cyrillic). Streets signs also have English translations (beware, most names are still tongue-twisters). As do restaurant menus (but usually not the staff). But that’s about it. The city is no more friendly or welcoming than what I remember from September. Hey I just rhymed.

The one thing that saved me this trip? Well, two? They both start with F. 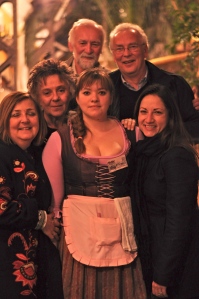 Jaro’s parents and aunt & uncle from Chicago shared this trip with us. Our first night there, we had a family dinner at Pervak (sorry, the website is only in Ukie), a theme-y Ukrainian restaurant. The food was good (hellooo varenykyj, hellooo borscht), the waitstaff was amusingly unamused (see: above photo), and the decor was tacky (think barnyard… complete with flying pigs), but it was fun. There was even live music. Oh, and a free shot on the way out: 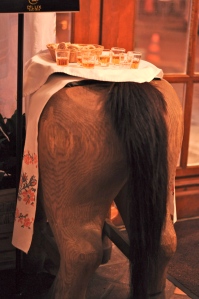 The next day (Day #2), we headed to a craft fair at the Kiev expo center and picked up some goodies. But first we stopped at a Kyiv institution: Kyivska Perepichka where we enjoyed this classic: 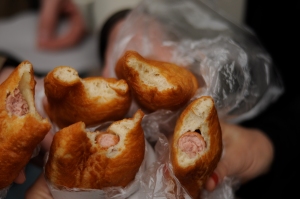 A MUST in Kyiv.

Followed that up with a walk down Andriyivsky usviz (good Wikipedia article here). Well, an attempted walk. It is almost completely under construction and I doubt it will be done in time for the tournament. At 5pm, we realized we forgot to eat lunch so we faced this beast at Sunduk Pub on Mykhaylivska: 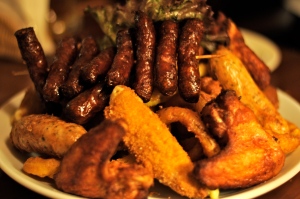 Aptly named, no? Caution: Combining the above with liter-sized beers may cause a serious food coma. I inhaled so much beer and onion rings that I think I lost my vision for a few minutes.

Once we all rolled home, it was a quiet evening. We ended up ordering late night Italian from Oliva‘s since they delivered (in the rain, God bless them!), and that was okay. I hear dining in is way better.

Monday (Day #3), Jaro was in the office, so his family and I headed to St. Sophia, arguably the most famous cathedral in Ukraine. Here she is:

Not very engaging for the non-Ukrainian-speaking set (aka: me), but the views from the bell tower were expansive (wouldn’t say nice, as the Kiev skyline is not much to look at IMO). At least it was good for some landscape photos. A quick bite at Golden Gate Pub (popular with British/Irish expats) made for a friendly pit stop. A smiling server goes a long way in Kiev. Dinner that night (did we only eat on this trip??) was at an awesomely delicious Georgian restaurant called Kazbek (here is the English homepage for the chain). Ever since we tried it in Moscow, I’ve been obsessed with Georgian food. Order the khachapuri. You won’t regret it.

Tuesday (Day #4), I attempted a solo excursion (hey, if I could do it in Moscow, I could do it here). Walked up Taras Schevchenka boulevard, and headed north to eatery Bulochnaya Yaroslavna for their tasty meat pies (note: 99% of my excursions revolve around food, the other 1% is doing something that makes me hungry). Well worth the 45 degree angle climb up Ivana Franka street. That night, Jaro & I had a date night (these rules still apply when we are in Ukraine!) at a surprisingly nice French bistro called Under Wonder. It’s rated as the #3 restaurant in Kiev on Tripadvisor. Not sure if that’s saying much, but it was decent. Just look at Jaros’ meal! 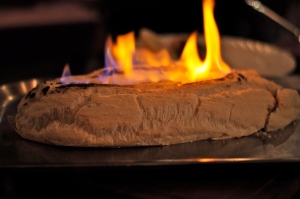 Fish in a Salt Brick - A flame!

Coming from Chicago where we were spoiled with tons of fabulous restaurants, this wasn’t perfect, but it felt very western (as in western European, which is a compliment) and the waitstaff was refreshingly friendly. We definitely had our fill of enjoyable dining experiences on this trip! Like I said, a smiling server goes a long way. I certainly realized how that impacts a meal.

Day #5 was our last day in Kiev, so I opted to stay in and get myself ready for the second leg of our adventure – L’viv! Before departure, we did all enjoy a last meal together at Arena Beer House across the street from our apartment. Though Russian-speaking, our server was friendly and the food was similar to American bar food! Not bad! Then, the whole family boarded the train (train website – in Russian… that takes some patience to navigate) from Kiev to L’viv (an 8 hour overnighter). We had extremely low expectations for this train ride, but were pleasantly surprised.  It was a new-ish train in good condition, rooms were clean and we even had our own bar room: 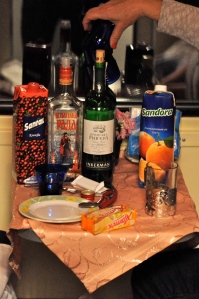 …And the clanking train violently rocked me to sleep (okay, the vodka helped). Goodbye, Kiev!

Compared to my last visit, when I didn’t have a guidebook or much common sense, I was impressed with Kiev’s dining scene. That’s a tremendously important part of travel for me. I love experiencing culture through food and I think I’m still full from all the varenykyj (dumplings filled with various ingredients, my fave are the cabbage or the potato) and borscht (beet soup, preferably with dill and sour cream) that I ate there. So, so good. So, so bad for me. Oh well. That’s what exercise is for, right? While you can find a good meal in Kiev, I’m not sure what else the tourist can expect during, say, their visit for the European Championship. From my point of view, it’s a difficult city to visit and enjoy. Having a Ukrainian-speaking husband and family did help some, but even then a lot of Kiev residents speak Russian. It’s really weird. And no matter what, we Americans stick out like sore thumbs. We’re targets for pan handlers and scheming con artists. Nothing scary or dangerous, just sad. So we did the only thing we could do – We made the best of it. Lots of laughing, lots of food and lots of beer helped. It’ll be interesting to see what gets written up about it this summer as the city hosts more tourists than it has capacity to hold. …Very interesting.

See you on the other side (of the country that is) – My next post takes us to L’viv!